Lent 2015  Bishop Ken's Talk on our missionary partnership with Beryl Baker in Paraguay is below.

Nurse Beryl Baker works in the Chaco in Paraguay 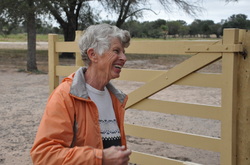 Beryl offers the only hope of medical treatment to around 18,000 Indians in the Paraguayan Chaco. She has dedicated 30 years of her life to this area and describes herself as ‘orderly, gynaecologist, midwife and dentist’, treating anything from TB to gunshot wounds and snakebite. The government provides some medicines but offers little else in the way of support. Beryl has trained Indian health promoters to meet some basic community health needs.
﻿
Beryl runs a clinic based on a ranch owned by an American from Texas.  The Indians will hitch lifts many miles to seek help from Beryl.

Unlike many ranches the ranch has kept many trees and is a haven for wildlife.  Beryl has a love for animals, especially horses, though a fear of snakes.  When Captain Richard visited from our parishes in 2011, Beryl was looking after a young but very large giant anteater in her front room!

Beryl's love for animals and the environment is huge.  Yet her deepest love is Jesus and his word.  She takes every opportunity to share his life through word and practical care.   Every Lent the parishes raise funds for medical supplies for Beryl's work.

The Clinic and Beryl's work 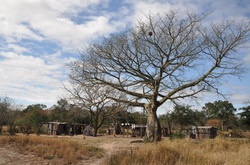 The word chaco in Spanish comes from the Quechua word chaqu meaning “hunting land”. It refers to a sparsely-populated lowland region of the Río de la Plata basin, and covers over half the total
area of Paraguay. It is one of South America’s last agricultural frontiers, with a semi-arid climate.
The Chaco lacks all basic infrastructure and modern amenities.  The vast majority of people living there belong to indigenous groups living at subsistence level based on cattle farming. 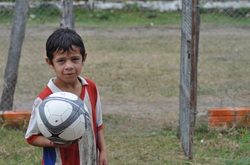 Paraguay is a landlocked country in the centre of South America, neighbouring Brazil, Argentina and Bolivia.  The Capital city Asuncion is the greenest capital in the world.  Due to past civil war the population is lower than many South American countries but it is growing fast, and is now over 6 million.  Paraguay's indigenous language and culture Guarani remain very influential although Spanish is also spoken by 90% of the population.  Like many South American countries there are huge differences between the lives of the rich and poor.  The weather is also one of extremes with drought and flooding common.